We are going to have a basic set of rules that you need to follow if you wish to use our services. These rules are work in progress and a community effort - they are going to be discussed on the Policies channel at SceneCity. 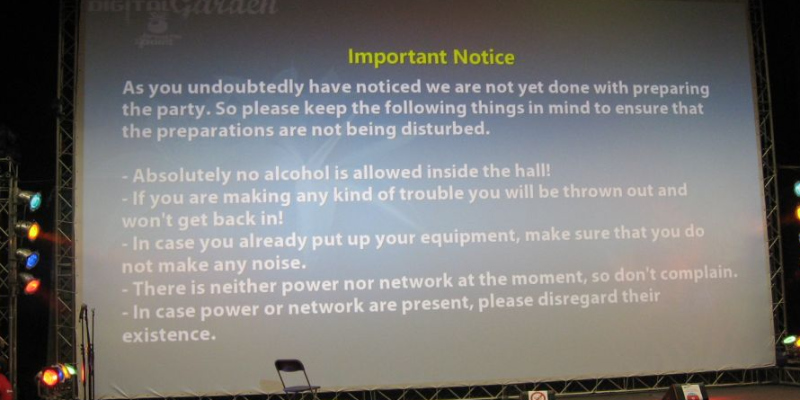 Don't try to hurt people. Don't try to be easily offended. SceneCity is not a safe-space, but it's also not a place to make humanity suffer for your grievences. The demo scene is a place where all kind of quirky people work together. This means there will be conflicts.

The key is on how these conflicts should be resolved, and how to prevent things from getting from bad to worse.

Due to this, SceneCity is planning to run based on a concept of democratically elected mediators. On many platforms "moderators" are really people who are longing for that little extra kick of being in power, and often people who are easily triggered themselves.

At SceneCity, the topmost goal is not to have to exclude anyone who's active in our community - the demoscene. This means that system bans must be the absolute last resort taken. Instead, we wish to have people who are not easily emotionally engaged, but who also have an emphatic side, to try make everyone being able to share a common place without the need to agree on everything. This typically means trying to bring people back to the table. Not an easy task, but often rewarding.

Also, there are different needs when it comes to moderation depending on the subject at hand. Due to this, subjects that typically lead to heated exchanges - besides demos, of course - will go on dedicated channels. You don't agree on politics and never again want to talk to that other person about it again? Sure, but that should not prevent you to share a common channel when getting back to talking about demos.

The above is a just a rough draft of the core idea of SceneCity. The actual rules will be developed by the community over time.

Streaming - what goes, and what doesn't

We are providing the streaming services to sceners who wish to stream their demoparty or demoscene-related event. This also includes DJ Sets, provided the core target audience are demosceners.

Anything that is illegal in Germany is out. This means hard pornography, political extremism, and things like that. But no, unlike on Twitch, you will not get banned for showing your butt or using harsh language.

You are responsible for the content that you are streaming, we are just acting as a service provider. Should we learn about potential illegal activity, we will investigate in good faith.